What is the difference between religion and politics? Before, I have arrogantly called them “separate” but “intertwined” without caring to give a reason for my opinion. But what are they, and how do you succeed to divide the two? I’ll admit if I knew all the answers to that I would be a lot wiser. So these are just some quick thoughts I’ve made on the issue.

How to define religion? If you define it too narrowly, you exclude some that we suspect are religions. Yet if you define it too broadly, you include some that we suspect are not (like ideologies and philosophies). I suppose we all have our own ideas as to what religion really is, so I’ll leave it at that. Politics however can be more easily defined as a process where groups of people make collective decisions.

Spiritual and mundane matters seem to run into each other fairly frequently. When political decisions are made where moral issues have to be considered, religion often comes into the picture. Even within religious groups political decisions will sometimes have to be made. Organized religions may wield significant political power. The Pope may have been the most powerful political figure in Europe during the Middle Ages. Today the War on Terrorism is inaccurately viewed by many as though it was a religious war between Christianity and Islam.

I can’t seem to explain it well, but there is a reason why I think we ought to at least try to separate religion from politics. Personally, I think it is absurd to, for instance, try to draw a line between things like a “free market” and “Christian values”. How do these have anything to do with each other? Another thing is how the West automatically leaps in support of the non-religious political faction in countries like Egypt even if it is rotten. The only reason we do this seems to be because we have already automatically assumed that the Muslim alternative must be even worse. I think that this has been done many times, maybe without even considering the actual political differences. Not only is it hypocritically un-democratic, but I think it highlights a lot of misguided prejudices. For instance, we think that “secular” must always be more gender equal than Islam, and we also tend to think that Islam is less compatible with democracy than Christianity. But why should it be?

Though I don’t think I’ve exactly managed to illuminate the issue much, I’d like to at least bring up the question. What are your thoughts on this?

The Politically Incorrect Guide to Christianity

I work part time at a second hand shop, and one time I was pricing books that had come in I came across a book from 2006: The Politically Incorrect Guide to Islam. It stated such abhorring claims that I looked over my shoulder to check that my boss wasn’t there before I threw it in the bin. I later found out about the controversy it caused. The idea has been swirling around in my head for a while to make a Christian/Western version of the cover, and now I finally got down to doing it. The reason why politics and religion are mixed, are simply a because it is too often mixed when talking about Islam. Please enjoy, and let me know what you think!

(PS: Sorry about the quality, it’s the first time I make something like this. I got the images from here and here, and I used Picnic and GIMP to create the image) 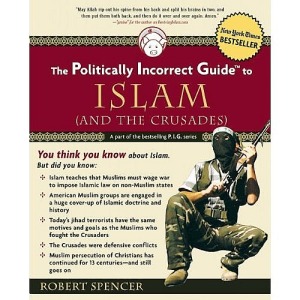 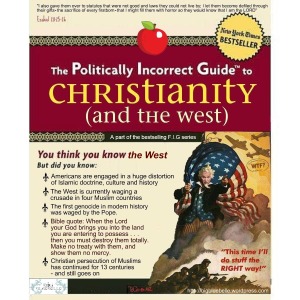